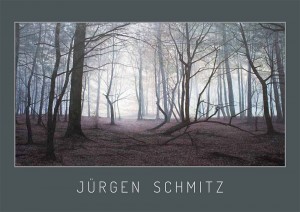 One winter night recently, I spotted what I thought was a huge enlargement of a photo of a misty forest in the window of a workshop and gallery in a small city. A closer inspection showed that it is a painting, carefully detailed by Jürgen Schmitz. The scene is realistic, like a photograph, but the skill of the painter adds more detail, low-contrast elements that digital photography would almost certainly not capture, as well as a sense of time and wonder which glows like the light coming through the trees.

In the next window, I saw some wonderful glowing sunset clouds depicted in a huge frame. Ah, but there it 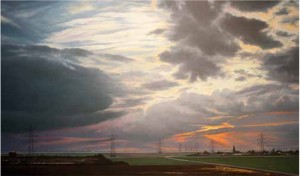 must be a photo – shame about the distracting high-voltage power lines! These are also paintings. Siegburg, where Jürgen Schmitz lives and works, is surrounded by infrastructure: high voltage electricity, several train tracks including the high-speed train which can bring you to Switzerland, Belgium, or distant places in Germany, and motorways. There is a river and forests, pastures of cattle next to old castles, and almost always a plane flying overhead.

The Romantic Age, the time a few decades after industrialisation in Europe, when awe=inspiring nature and mountains were a prime inspiration for artists, has left its effect on us even more than a century later. The signs of human impact on the landscape seem discordant in a scene of beauty. And yet that is what is there. And, in addition, it is a continuation of the pre-romatic tradition. One of my favourite paintings is Vermeer’s view of Delft, showing ships and in fact a lot of industry. Or van Ruisdael’s 1682 view of fields where textiles were bleached – a mainstay of the Dutch and Flemish economies in his time. 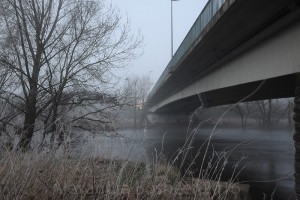 I am inspired by these thoughts. Recently, when working in a frosty morning with mist rising from the river, it is the articificial light of the car headlights and the bridge across the river which are essential to my photo. And, as evidenced by the otter who ran from the bank and swam away from the disturbance of the photographer, perhaps it is a more natural scene than we have learned to see!