Photography without a lens 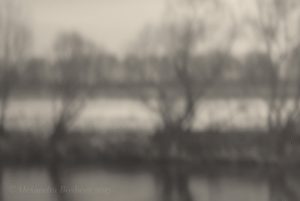 A camera is basically a light-tight box, with one (usually) controlled ‘door’ through which light can enter. The light brings with it the colours of the objects it has bounced back from. Because light travels in straight lines, the light coming into the box through the ‘door’ can, when projected onto a surface, it reflect the shapes and colours of the scene opposite. This is the same idea as the original camera obscura, in which scenes outside a room were projected onto a wall through a hole.

Inspired by some pinhole images, I decided to make myself a pinhole camera. I took the lens off a digital camera (Nikon D200, although this can be done with any camera body from which you can remove the lens). I poked a tiny pinhole in a round piece of black cardboard, wrapped the edges of my ‘lens’ in old, clean, black socks (to prevent light coming in around the edges and interfering with that coming in through the pinhole), tied the cardboard onto the camera body with some string (to fasten it closely and parallel to the back of the camera body, but without tape), and tried my pinhole camera out. 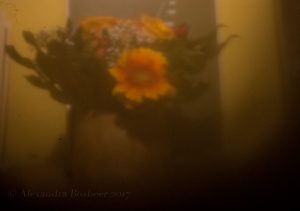 If you have access to a darkroom that you know how to use, then you can make an even simpler pinhole camera: a box or tin, a pinhole, and a bit of film or photographic paper. I remember doing this in school science class at the age of 10 or 11. A shoebox and a bit of tape to cover the pinhole. And now again I’ve re-discovered the basics – the smaller the pinhole, the clearer the image. It isn’t exactly sharp – there is a reason why photographers bother with lenses and focussing! But atmospheric and misty, a bit abstract and reminiscent of old photos – definitely. It is another tool that can be used to create a work of art, something that tells a story. 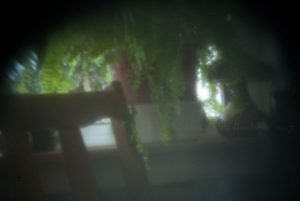 The feeling of a Victorian conservatory – ferns in the window on a winter morning. Pinhole exposure about 1 1/4 minutes.

With a pinhole, you don’t know exactly what you will get. It is difficult to get much of a view of the composition through the hole. You can’t zoom in or out, or seek a nice wide view to capture the deep blue evening sky. Perhaps it’s a type of ‘point-and-shoot’. I tend to aim the pinhole toward what I want to try photographing, and then time the exposure based on gut feeling and experience. (The exposure vary a lot – I found a sunny afternoon to only need 20 seconds or so, whereas the interior shots in the morning were three times as long. All I can say, really, is try it out!