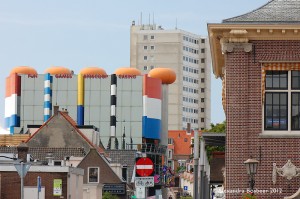 Creative with cheese! Zandvoort, The Netherlands.

A museum pass is a wonderful thing: it encourages one to make as many museum visits as one can. In fact, it’s perfect for me, as I am able to absorb the creativity of others only for a few hours at a time. Well, I mean high art. Creativity shows itself in different ways – I would classify the large inflated cheese wheels adorning a building in Zandvoort (see photo) right there with the Haarlem Historical Museum, which showcases a film with moving parts – like a model aircraft zooming above museum-goers’ heads to represent Fokker flying his ‘Spin’ over the main church in the centre of Haarlem in 1911. 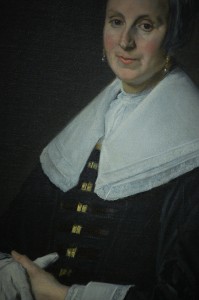 Detail of Frans Hals’s painting of woman with gloves.

But there were two elements of creativity of Dutch Golden Age painters which struck me today. One is the very contemporary brush strokes. Frans Hals suggests square gold buttons on a dress – and then precisely shows the ribs on the buttons, and the face is also simultaneously exact and showing a bit of blurred movement. His cheerful crowds and merry drinkers are engaging – and yet depicted in a way that loves that their portrait is in paint. The mix of precision and movement, of fine lines and broad swatches, is something that one can really only express with brushes. (The rough-and-fine hand is also seen in Rembrandt’s work, especially some of his self-portraits.) Photography, ceramics, pencil and chalk, none of these can duplicate this master’s brush movement.

The second is the bright, hard whites and 20th-century approach to depiction of a young face (see Pieter Pietersz portrait of Margareta Deyman, and zoom into her face to see the detail). What was reinvented in modern times was already practiced by these creative brush-using painters four hundred years ago. 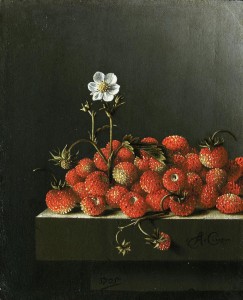 Adriaen Coorte, Still life of strawberries, in the Mauritshuis Collection, The Hague.

I was also impressed to discover the tiny portrait of wild strawberries by Adriaen Coorte. He precisely depicts small, what we would now call ‘wild’, strawberries in a cosy crowd on a mantel. The flower rising proudly makes the painting more than just about the strawberries – it’s about the smell and taste of the tiny berries, and perhaps even about the excitement when they first become ripe – something we have stolen from ourselves with our fruits available all year round, shipped from distant places by air and sea and truck.

Imagine instead living hand-to-mouth, feeling driven to make art but finding it hard to fund canvases to use. Imagine Haarlem of the early 17th century, the third most important city of the region, full of economic growth and then contraction, even suffering a plague epidemic. And yet having the spiritual room to be creative in style, in brushstrokes, in composition.

I have recently been thinking of two significant conversations when I was young, during which I was strongly advised not to take up art if money was a concern. I now sincerely regret heeding the force of the advice from older people. Perhaps my drive to create was not yet strong enough to repel these warnings. But most certainly, those adults were only helping create a less creative world by discouraging young artists. To all around young artists, I call on you to support and not discourage the germinations of creativity.